In this era of renewable energy and space exploration, harnessing solar energy is becoming increasingly important. As a result, different material systems are being employed, new designs implemented and systems tailored for use specific environments.

The PVE300 photovoltaic QE system produced by Bentham is an essential tool in PV research and production line quality processes, employed in the accurate determination of solar cell spectral response by EQE (IPCE) and IQE testing.

Whether the illuminating source be the sun or artificial light, it is clearly desirable to maximise device responsivity over as wide a range of the broad source emission range as possible. In practice, devices respond only to a restricted range of wavelengths, limited at long wavelengths by the material band gap, and at short wavelengths by material absorption. Device spectral response depends upon a large number of factors (including material system, device design, electrical contact, etc.) and is limited for single junction p-n devices by the Schockley–Queisser limit. The combination of these parameters may be evaluated in considering the device energy conversion efficiency.

The spectral response (A W-1) of a PV device provides information on the physics at play at the device, taking into account not only the convertor, but also the reflectance and transmittance of the device. The external quantum efficiency (EQE) divided by internal photon conversion efficiency (IPCE), defined as the number of electrons provided to the external circuit per photon incident on the device, can be directly obtained from the spectral response.

This measurement is performed by shining a monochromatic probe beam onto the sample and recording the photocurrent generated as a function of wavelength. Care should be taken to ensure the probe beam is not shaded by electrical connections, or that the shading is taken into account by correcting the resulting response. The beam power of the probe is first characterised, using a detector of known responsivity (A W-1). Subsequent measurement of the photocurrent generated by the device under test as a function of wavelength allows for the determination of spectral responsivity.

To characterise the device under realistic carrier injection levels and in the case of multi-junction devices to ensure the junction under test be current limiting, a light bias at a level of one sun (an irradiance of 1000 WM-2) should be used. The challenge of discriminating between the photocurrent generated by the solar simulator from that generated by the monochromatic probe can be resolved by modulating the monochromatic beam, provided that the carrier transport mechanism at play in the device under test allows for a response at the modulating frequency. 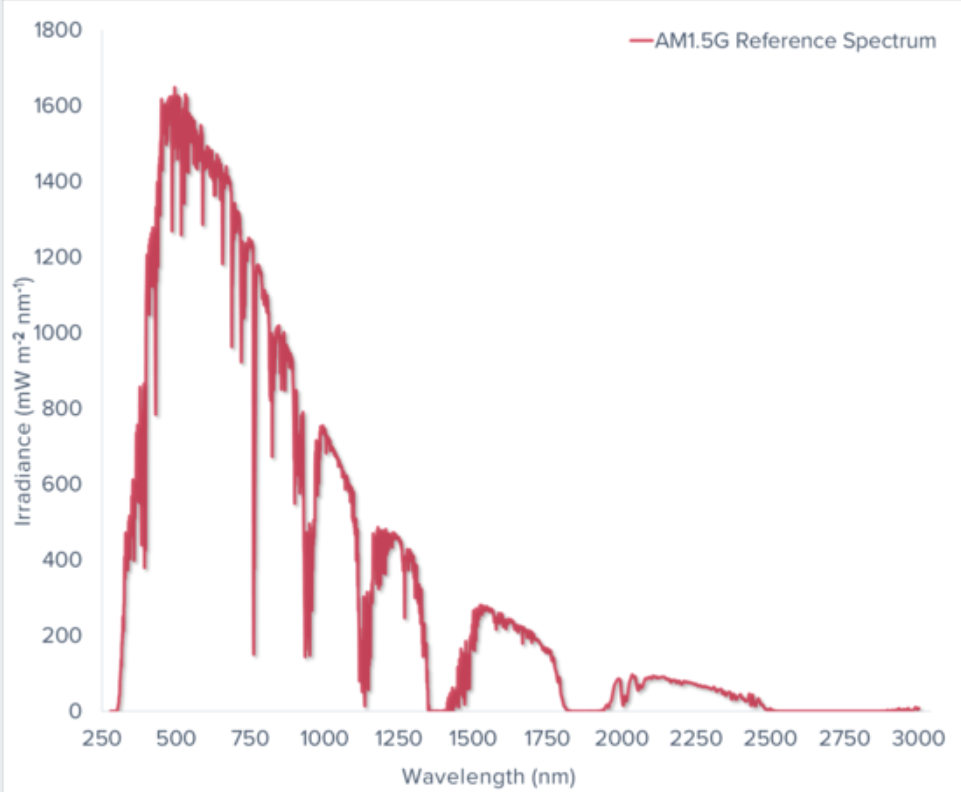 In an ideal world, all photons reaching a PV device are transmitted only to the active region where the conversion process occurs. Due to the refractive index of the materials used, light is reflected from the front surface of the device (to mitigate which anti-reflection coatings are applied). In the case of thin-film devices one should also consider that light may be transmitted through the sample. The total reflectance (diffuse and specular), and the total transmittance (diffuse and normal), of the device can be measured with the aid of an integrating sphere. 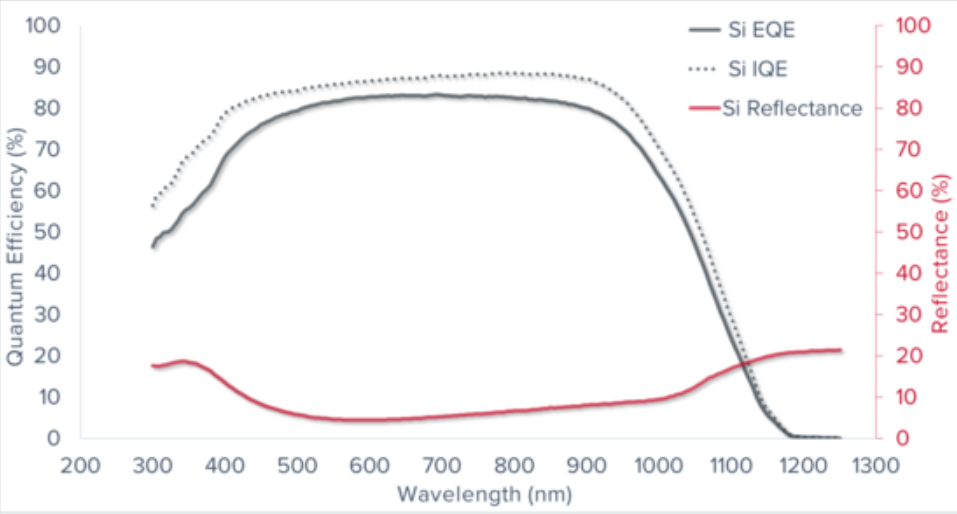 The EQE result can be modified to take into account reflectance and transmittance to consider only the portion of the incident light reaching the active region, yielding the internal quantum efficiency (IQE). This allows a better understanding of the material properties of the device.

The measured spectral response may be used to predict the expected device short circuit current density, Jsc, under standard testing conditions of AM1.5.

I-V measurements of PV devices, used to determine device Jsc and Isc (amongst other things), should be performed under AM1.5 illumination. A reference cell is often used to determine the irradiance of the solar simulator used. Where the spectral response of the reference cell differs from the test cell, a mismatch factor should be computed. This requires knowledge of the spectral response of the reference device and the device under test.

To request more information or a quotation for this or other Bentham products, contact IL Photonics.