Lambert Instruments is pleased to recognize the work described in a recent Nature Methods article authored by the research group of Professor Elizabeth Hillman at Columbia University in the City of New York. The researchers used SCAPE microscopy in combination with the Lambert Instruments HiCAM Fluo to achieve high-resolution volumetric imaging at over 300 volumes-per-second and over 1.2 GHz pixel rates 1.

The experiments described in their Nature Methods article build on the swept confocally-aligned planar excitation (SCAPE) microscopy technique developed by Hillman. “SCAPE microscopy is a technique for high-speed 3D microscopy that can image freely moving living organisms through its combination of light-sheet illumination and confocal descanning.” says Elizabeth Hillman, professor of Biomedical Engineering and Radiology at Columbia University and a principal investigator at Columbia’s Zuckerman Institute. “We needed a camera that was fast enough to keep up with SCAPE, while also being sensitive enough to capture the light that is emitted by fluorophores dyes. The HiCAM Fluo proved to be up to the task.” 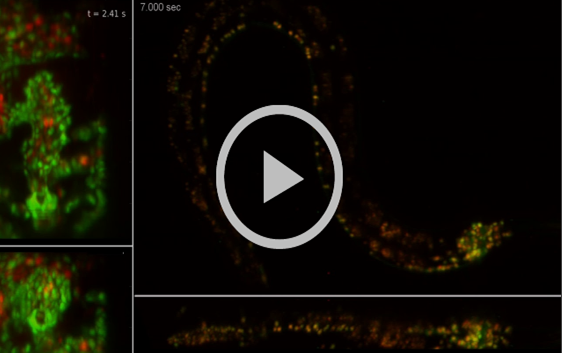 The HiCAM Fluo enables high-speed image acquisition in low-light situations by combining a high-speed camera sensor with the extreme light sensitivity of an image intensifier.

To show the possibilities of their SCAPE 2.0 microscopy platform, the researchers imaged several living organisms, including zebrafish larvae. “Zebrafish are a common model organism for understanding how the heart works and how it is affected by disease.” explains Hillman. “Their transparent bodies at their embryonic and larval stages make them ideal for light-sheet microscopy. While calcium-sensitive GCaMP and voltage sensitive dyes have made it possible to visualize the electrical activity of heart cells, it is generally necessary to paralyze the heart during imaging. But a paralyzed heart is not a beating heart. SCAPE is capable of imaging fast enough to do high-density, real-time 3D imaging of calcium dynamics and red blood cell movements in a beating heart.” 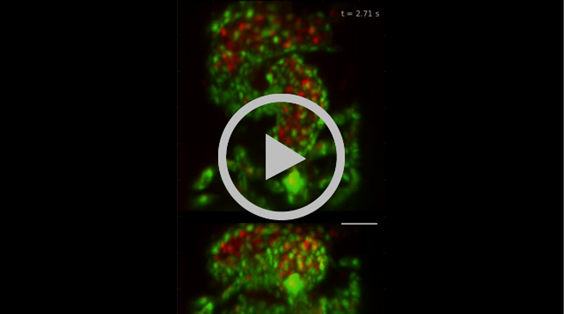 With the HiCAM Fluo, the researchers were able to image a beating zebrafish heart at 321 volumes-per-second. The resulting 3D videos show the beating zebrafish heart as never seen before: Individual red blood cells can be followed as they are pumped around. Waves of green GCaMP spread from the atrium to the ventricle illustrating the calcium dynamics in the heart.

In their article, the researchers also describe how SCAPE can be applied to study neural activity in freely moving C. elegans worms, and to perform high-throughput structural imaging in a range of fixed, cleared and expanded tissues. “The research that is being done in Professor Hillman’s group is a great illustration of what our intensified high-speed cameras are capable of.” says Johan Herz, sales engineer at Lambert Instruments. “In this application the researchers needed to record many 3D volumes per second to visualize the movement and cellular signaling of the living samples in great detail. That requires high-speed imaging in low-light conditions, which is exactly what our intensified high-speed cameras are designed for. We are very excited that the group of Professor Hillman uses our HiCAM Fluo for their groundbreaking work.”

To request more information or a quotation for Lambert products, contact IL Photonics.