Home » Improved Lifetime and Performance for your Mass Spectrometer

Improved Lifetime and Performance for your Mass Spectrometer

Improved Lifetime and Performance for your Mass Spectrometer

The performance of your mass spectrometer is often limited by the capabilities of the detector. Photonis developed an electron multiplier family called the MAGNUMTM, which provides significantly improved performance by increasing linear output current, reducing noise, and increasing detector life.

The MAGNUMTM Electron Multiplier consists of six helical multiplier channels tightly wound about a central axis. The six channels are connected on the input side of the device by a single, integral collection cone. The six multiplier channels feed a single anode, which collects and integrates the charge from the channels into one output signal.

Multiplier life, characterized as a reduction in gain, has been significantly increased. Because detector life is proportional to total channel surface area, distributing the extracted charge over six times the area, will yield a proportional increase in the lifetime. In addition, the MAGNUMTM provides substantially greater gain at any given voltage. This results in the multiplier voltage setting being lower and the instrument power supply can subsequently compensate for a greater decline in gain before the detector must be replaced.

In order to demonstrate the substantial increase in multiplier life, Photonis purchased equivalent multiplier models from the other major replacement and OEM multiplier manufacturers. These multipliers were subjected to extensive testing to determine the useful life of each. Each multiplier was subjected to a continuous flux of low mass positive ions. The gain of each multiplier was measured at regular intervals and the total extracted charge was calculated.

Figure 1 presents the results of the testing. Note that the MAGNUMTM initially has a substantially higher gain than the competitive models. As a result, the mass spectrometer’s initial tune voltage will be substantially lower. Consequently, there is more room for the gain to be adjusted as the multiplier ages during use. 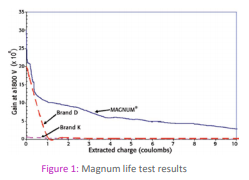 The test was terminated after accumulation of approximately 10 coulombs of extracted charge from each multiplier. The results indicate that, even after prolonged use, the MAGNUMTM retains its performance advantage and still has a substantial amount of life remaining.

The MAGNUMTM also has two characteristics which improve the linear output current and dynamic range performance. First, the MAGNUMTM produces gain with six channels, instead of the conventional single channel. As a result, the total charge drawn from each individual channel is reduced, therefore raising the maximum linear output current level. Additionally, the MAGNUMTM incorporates a special Extended Dynamic Range (EDR) feature, which effectively causes the channels to recharge at a rate nearly 10 times faster than conventional devices.

In conclusion, a revolutionary new electron multiplier has been developed incorporating a novel multi-channel architecture. This compact device has demonstrated higher gain, lower noise, and superior linear output current capabilities. This device is tolerant of poor vacuum conditions and holds the promise of longer detector life and reduced operating costs. The simplified manufacturing process has resulted in lower manufacturing costs and lower procurement costs for the users. The compact on-axis design will facilitate the development of new miniaturized instruments.

To request more information or a quotation for this or other Photonis products, contact IL Photonics.