A group of scientists led by Dr. Eliot Gann from the National Institute for Standards and Technology (NIST), based at the NSLS-II in Brookhaven (New York, USA) has built a facility for Resonant Soft X-ray Scattering (RSoXS). This facility was primarily built to measure nano-scale soft matter structures. A key component of this setup is a low-noise greateyes CCD detector. The group’s findings were presented in their recent publication, entitled “A NIST facility for Resonant Soft X-ray Scattering measuring nano-scale soft matter structure at NSLS-II” [Eliot Gann et al 2021 J. Phys.: Condens. Matter (in press)].

RSoXS is a technique that is gaining a lot of traction for research evolving nanostructure characterization of soft matter. By utilising X-ray radiation near the absorption edges of carbon, nitrogen and oxygen, materials containing these elements can be probed. In particular their molecular bonds and their orientation. The technique already gained a lot of popularity in the characterization of polymers, primarily to better understand the nanoscale structure in organic electronics materials.

RSoXS experiments present several challenges. One of them is caused by the lower energy of the applied X-rays. Soft X-rays are defined by having energies less than 2 keV. This results in a shorter penetration depth through most materials and even through air. As a result, RSoXS stations require a high vacuum environment for both the sample and the detector. This in turn limits the range of samples that can be probed by such a setup. The relatively low X-ray energy also means that the penetration depth through samples is limited, and that special detectors that are particularly sensitive in this energy range must be used. The layout of the RSoXS station at NSLS-II is shown in the figure below.

RSoXS layout and schematic
(larger image at top of this post)

As a very unique feature of this setup, it is possible to partially withdraw the WAXS CCD detector and measure both small and wide angle scattering simultaneously (by also utilizing the SAXS detector at the same time). After careful consideration, the two detectors chosen for the RSoXS station were customized, CCD-based cameras from greateyes GmbH in Berlin (Germany). Both CCD detectors have a resolution of 4096 × 4096 pixels with a 15 µm pixel pitch. They are flange-mounted, and their sensitivity is optimized for the detection of soft X-rays. The angled positioning of the sensor enables ideal positioning of the detector focal plane with regard to the sample. The camera’s light sensitive area is approximately 60 mm2 with a 100% fill factor. In operation, these back-illuminated CCD surfaces are cooled to -80 °C via thermoelectric cooling. The greateyes ALEX 4k4k camera is similar to the one used at the NSLS-II in Brookhaven. 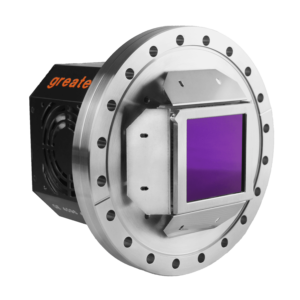 As the RSoXS station at NSLS-II covers an energy range between 0.1 keV and 2.2 keV, back-illuminated CCDs are ideally suited, because they offer superior sensitivity in this range. In regular operation, both detectors are read out in a 4×4 binning mode (now with effectively 60 μm2 pixels) in approximately 1 second. The binning increases the readout speed, while maintaining low noise levels. The resolution is still much smaller than the beam size on the detector, which is 250 μm under normal conditions. Because binning is important for the experiments, it is very advantageous to avail of the 18-bit digitization of the greateyes CCD cameras. This enables the detection of signals with high photon flux — without saturating the detector. At the same time the camera still provides excellent sensitivity for signals just above the detection limit. CCD technology is used for the RSoXS station because it allows the best signal-to-noise and flux efficiency, with the largest detection area. This in turn gives scientists the best chance of measuring their samples (sample nanostructures and sample chemistry) before the beam has a chance to alter them. Even faster detection systems are desirable and in use on other soft X-ray beamlines at NSLS-II. These systems currently come with the drawback of increased noise and therefore would require increased flux on the samples before the same signal-to-noise ratio could be reached. The majority of users have also found that the exposure times generally required to obtain statistically relevant measurements do indeed match the speed capabilities of the greateyes CCD detector very well. But to make proper use of the increased flux of future sources, faster, highly efficient, low noise soft X-ray detectors will be advantageous.

Popular samples that could already be studied at the RSoXS station were photovoltaic, double-cable polymers. These organic electronic materials offer possibilities to study resonant polarization and diffraction effects at X-ray energies between 90 eV and 2,200 eV. The RSoXS station is ideally suited for these applications. For this to succeed, the high angle scattering performance of the experimental setup is critical. Gann et alia demonstrated the high angle performance of the scattering station on these organic electronic materials. Please note the 360° of azimuthal scattering achievable with the WAXS detector in the closest position. By this the characterization of the energy dependence of a device, relevant length scale diffraction peak is demonstrated. The ring observed (see figure below) under resonant conditions corresponds to the first order side chain stacking peak, which exhibits notable anisotropy. This in turn also demonstrates that the RSoXS station can collect a full ring of scattering, corresponding to size scales approaching the wavelength of the probing X-rays (4.35 nm at 285 eV, 13.8 nm at 90 eV, and 0.56 nm at 2,200 eV). This is opening up the possibility of studying resonant and polarization diffraction effects at soft X-ray energies near the wavelength limit. 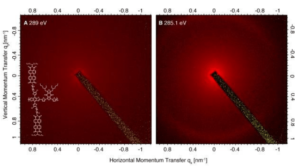 An advanced RSoXS station at NSLS-II has been built primarily as a tool to conduct soft matter measurements, focusing on mitigating the beam damage and making maximal use of every photon interacting with the sample. This led to a unique layout for a scattering beam line with the data collected by low noise large area CCD detectors from greateyes GmbH in Berlin. This experimental setup has already allowed for data capture with near complete removal of the carbon dip, while maintaining stable, high-flux and high-resolution spectroscopy.

To request more information or a quotation for this or other greateyes products, contact IL Photonics.