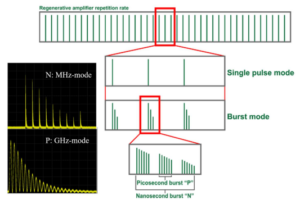 The CARBIDE User App enables the user to quickly set the P and N pulse envelopes by simply moving the sliders on the user interface, as shown below.

Importantly, the burst option for CB3 does not require a different size enclosure. For additional information about Carbide CB3 burst-in-burst capabilities, click here.

To request more information or a quotation for this or other Light Conversion products, contact IL Photonics.